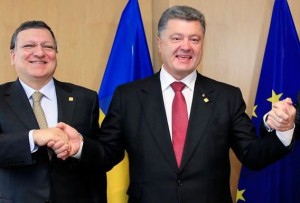 Ukraine and the European Union ratified this Tuesday a historic Partnership Agreement which specifies the distance of this former Soviet republic from Russia, east scenario of a strong pro-Russian separatist movement.

Ukrainian President Petro Poroshenko, considered that the adoption of the Partnership Agreement, approved by 355 deputies present, is a “first step” for accession to the European Union (EU).

The ratification came shortly after the elections scheduled on December 7 and an amnesty for faced soldiers and insurgents in the region of Donbass for five months.

This agreement, which was signed in June, at the moment remains merely symbolic and includes political and economic chapters.

However, the commercial aspects will not take effect until December 2015 to allow time to discuss with Russia, which opposes its terms.

Vessel with 250 African migrants shipwrecked off the Libyan coast