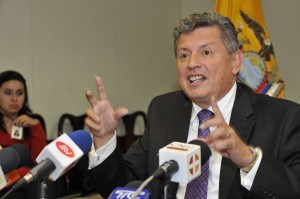 In October 2012, Pedro Delgado Campana received a mortgage loan for            $ 190,000 from the Austrobank, which is domiciled in Panama and belongs to the Eljuri Group, to purchase a house in Miami.

This is indicated in the so-called Panama Papers, which were filtered off the Panamanian law firm Mossack Fonseca, and revealed on Sunday by the International Consortium of Investigative Journalists (ICIJ).

To get the loan and register it in Florida, Enrique Cordova, executive of Austrobank, resorted to Mossack Fonseca (MF), which, in turn, contacted Greg Herskowitz, of the Pinecrest Title signature, to carry out that procedure.

He prepared the documents in order that Pedro Delgado and his wife, Maria Endara Clavijo, then consul of Ecuador in Miami, sign them. However, Delgado made several objections to the papers. Enrique Cordova welcomed all those observations, but Greg Herskowitz refused to provide his services.

Delgado is second cousin of President Rafael Correa and was director of the Central Bank of Ecuador. He resigned in 2013 after admitting he had forged his degree in economics from the Pontifical Catholic University (PUCE). He is currently wanted by the Ecuadorian courts.