Permission to exploit the Yasuni was approved 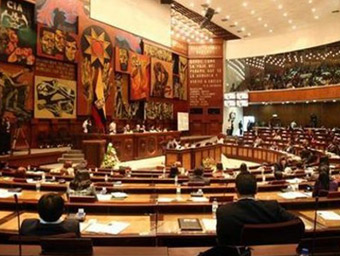 After the intervention of the representative of the Huaorani people, Alicia Cahuilla, the Assembly members began a debate, in which the opposition assumed the approval of the resolution, with the votes of the legislative majority of the Government, in which it was requested by the President, Rafael Correa, the declaration of blocks 31 and 43 of national interest.

The Opposition Assembly member, Lourdes Tiban (PK), announced that she would join the groups that  are collecting signatures for the referendum, while there were extreme positions on the part of those who vote with the ruling party.

Antonio Posso, Member of the political party (Avanza), asked for the respect of all the intangible zone, while Rene Yandun (MIDC) rejected the consultation as untimely, and considered that it would be irresponsible not to extract oil from the intangible zone because there are already studies.

In the plenary of the Assembly, 33 assembly members intervened for nine hours, and at 18:00 the President in charge, Rossana Alvarado (AP), declared the debate closed despite the opposition from the minorities, finally the request for exploitation was approved with the votes in favor of 108 Assembly members of AP and its allies, while 25 others voted against.

After the viability granted by the Assembly to the exploitation of the blocks 31 and 43, the voices of support, and opponents soon followed. Outside, several environmentalists shouted the words “murderers”, “Correa and Chevron, are the same thing”, among other phrases, and asked for a minute of silence for the exploitation of the area, while defenders rallied the Government to make the exploitation with responsibility.

After  20:30, groups on both sides and the policemen left the scene, in the middle of a light shower.