Petroecuador, the ‘borrower’ of the decade 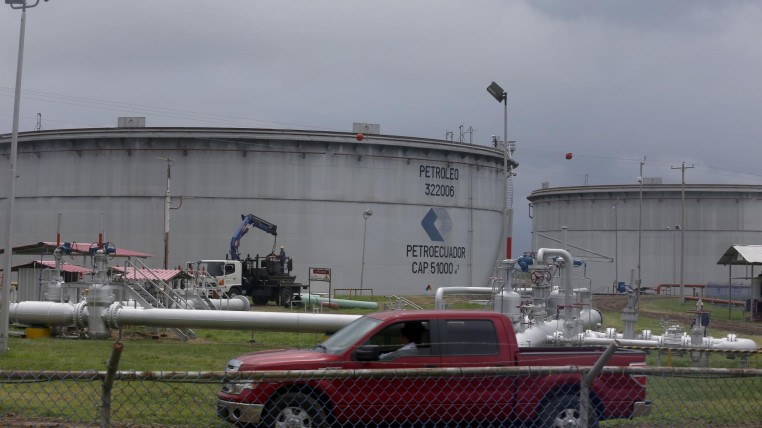 It is the origin of the irregularities. In 2014, the Ministry of Finance ordered that the public company Petroecuador borrow from agencies and banks to finance the “works for good living”. The payment of these commitments, however, would jeopardize the oil company. Newspaper EXPRESO had access to an interinstitutional agreement between the Ministry of Finance and Petroecuador signed on December 3, 2014.

Fausto Herrera, then head of Finance, established the agreement with the now sentenced Marco Calvopiña. He was the general manager of the oil company. Clauses 4 and 5 of the agreement determine that Petroecuador may obtain “lines of credit required by the Ministry of Finance to finance programs or projects that contribute to good living” an illegality for the opposition assembly members and even for part of the current government.

They support their criticism of the document in the Constitution of Ecuador and the Regulation of the Organic Code of Public Finance. Article 130 of the latter indicates that Finance is responsible for contracting, negotiating and registering government debt. The Constitution, for its part, ensures in Article 315 that public enterprises have “financial, economic, administrative and management autonomy.” The agreement alters that provision because it provides that Finance decides the movements of Petroecuador. Homero Castanier, Assemblyman from Cañar for CREO, commented that the agreement is illegal and should be subject to inspection. He announced that he will request, as a member of the Oversight Committee of the National Assembly, the appearance of the current CEO of

Petroecuador, Carlos Tejada, and the ministers of the sector to explain the scope of the signed document in the regime of Rafael Correa. It is precisely the former president next on the list of investigated. Castanier ensures that Correa had to know and even order the signing of the aforementioned agreement.

The former president will also be called, this month, to appear at the legislative table for other acts of corruption that occurred in his decade of management. He is obliged to attend because he is still subject to political control.

The authorities and former officials must also show the support behind the agreement. Technical, economic and legal reports are needed before allowing a document of such scope to be signed. Tejada told EXPRESO that the agreements and contracts could be “not adequate” for the country and that during his administration the necessary changes will be made.

With him coincides the Minister of Hydrocarbons, Carlos Pérez. He clarifies that you cannot order a public company to seek money to finance the expenses of the central government. However, it recognizes that the agreement has not yet been repealed. One of the results of this agreement is the loans with committed oil that Correa continues to defend and that have irregularities verified by the Comptroller General and that are investigated in the National Assembly.

The scope of the agreement, which will be renewed automatically in 2020 unless President Lenín Moreno repeals it, draws attention because it limits access to information to the authorities of the hydrocarbon sector. The deputy minister of the sector, Patricio Larrea, admitted in November that they are only discovering the content of some of the contracts signed with China. This limitation empowers the Ministry of Finance to set the payment terms that Petroecuador will have to comply with because it appears as “borrower”. That is, Finance asks for money, decides its destination and sets the payment terms.

EXPRESO showed the affectations to the country

On November 19, this newspaper published that Petroecuador’s petroleum pre-sale to Petrochina and Petrotailandia committed too much product. For 2.5 billion dollars loaned by the state company of Thailand, for example, some 7.5 billion dollars in barrels of oil were pledged.

Newspaper EXPRESO published the interest in the previous administration of the state Petroecuador to renegotiate the oil pre-sale contracts. Thailand and China agreed to sit down to negotiate the contracts and the first meetings are expected this month. There are also options to repurchase all the debt.

On December 20, this newspaper published a letter signed by the general manager of Petroecuador, Carlos Tejada, where the delivery of oil to Petrochina under the current conditions was guaranteed despite the announcement of renegotiation. Minister Carlos Pérez assured that the letter was intended not to scare the markets.

The oil sector (and Petroecuador in particular) has more shortcomings. Last week, two publications showed the continuous paras of the Esmeraldas Refinery and its impact on the economy of the country and the state company. In 2017 the refinery (supposedly re-powered) had 17 paras. (I)