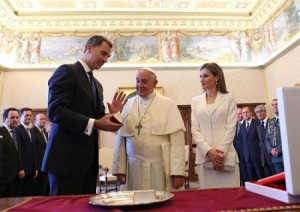 Today, the kings of Spain Philip VI and Letizia, met with Pope Francis in the Vatican. This is their first trip abroad as monarchs and was held between jokes and the the invitation of the kings to the Pope to visit Spain.

Before entering to the papal library for the meeting of about 40 minutes, Philip VI addressed the Pope to ask him, smiling, “The altar boys before?”, referring to the recent visit to the Vatican of kings Juan Carlos and Sofia when Francisco, with this expression, invited them to pass before him.

“That´s right, did your father tell you?”, answered Francis joking before giving way to Philip VI and Queen Letizia to start the meeting.

The King took leave of the Pope “in the hope of seeing you in Spain” and Francisco addressed to Letizia and said: “Hoping to see you again soon.”

Monarchs also met with the Vatican Secretary of State Pietro Parolin and talked about different social issues such as unemployment and the situation of young people in Spain, in addition to the development of Latin America.