Piaguaje debate against Watson for contamination of Chevron 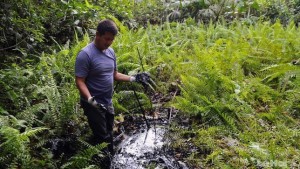 Humberto Piaguaje, Secoya indigenous  of the Ecuadorian Amazon, Coordinator of the Union of  Affected by Texaco-Chevron, lashed out to the main spokesman of the transnational oil company, John Watson, during the meeting annual of the Board of Shareholders of Chevron, which has been held since last Wednesday in San Ramon, California (USA).

Do you think that it is good to make money when the cost is paid with human lives, damage to the environment and without responding to the consequences? “,  told Piaguaje face to face. Texaco-Chevron-affected Union reported yesterday that after the statement made by Piaguaje, Watson replied mocking of the legitimacy of the victims in Ecuador.

“Saddens me very much that the people of Ecuador is still used by the trial lawyers in the United States”, said Watson, after showing a video in favor of the company.

Around 100 demonstrators and several environmental organizations and human rights gathered outside the headquarters of the General Meeting of Shareholders, in San Ramon.

Number of heirs will define the tax payment