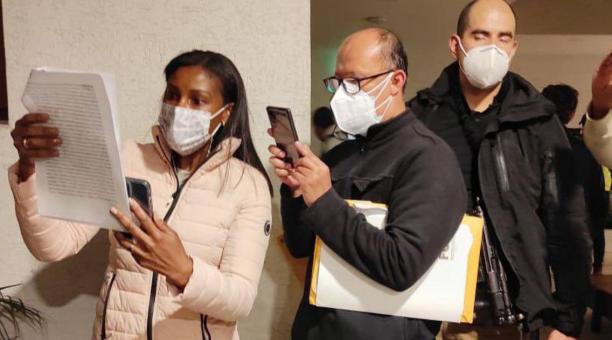 Celi was arrested at his home in Quito and was transferred to the Flagrancy Unit . The entity said that the investigations take place within the framework of an investigation opened in June 2019, for alleged organized crime related to alleged acts of corruption in Petroecuador , the Comptroller’s Office and the Secretariat of the Presidency . The State Attorney General, Diana Salazar , led the raids. Some 25 prosecutorial teams participated in the operation , in coordination with police units.

President Lenín Moreno spoke at 05:50 on Tuesday about the operation of the Prosecutor’s Office . The President said on Twitter: “I have had knowledge of the arrests and raids that occurred this morning. As has been my custom from the first moment, my respect for the independence and autonomy of the functions of the State.”

The agents also raided the offices of Esteban C. , the Comptroller’s brother , and of a former advisor to a former Petroecuador manager.

The arrest warrants were also launched against José AB, former secretary of the Presidency of the Republic.

In that incursion, computers , cell phones, documents and USD 32,580 in cash were seized . In total, eight people were arrested in the raids .

The arrest warrants were also launched against José AB , former secretary of the Presidency of the Republic.

After learning of the arrests, President Lenín Moreno and the Minister of Government, Gabriel Martínez , said that they respect the independence of the functions of the State to carry out criminal investigations.

“I have had knowledge of the arrests and raids that took place this morning. As has been my custom from the beginning, my respect for the independence and autonomy of the functions of the State ”, said the President.

Instead, Martinez maintained that they will provide any information that the Prosecutor’s Office requires in this case.

Martínez added: “It is news that shocks the country. It will be the Attorney General who will deliver more information since it is a case that she has handled for more than a year and a half ”.

Jaime Durán Barba, the ‘electoral guru’ who was key in Guillermo Lasso’s victory