Police officers turn their backs to the Mayor of New York 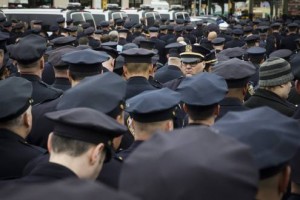 Thousands of Police Officers of New York turn their backs yesterday to Mayor Bill de Blasio, while praising an agent killed along with another companion, this happened despite the pleas of the Chief of Police to put the anger aside.

The event was outside the funeral home where Agent Liu Wenjian was remembered as the incarnation of the American dream.

“Let´s go forward to strengthen the bonds that unite us and work together to achieve peace,” said de Blasio at the funeral.

“When one of us dies, we must unite,” said Lucas Gran , from the Police Office of the Richmond County in Augusta, Georgia.

After hundreds of agents gave the back to a screen where de Blasio appeared during the funeral of Ramos, the police chief William Bratton, sent a memorandum in which he asked them to show respect and said that “the principal at the funeral of a hero is mourning, not the complaint.”

“The mayor does not respect us. Why should we respect him?,” said Camille Sanfilippo, detective retired from the New York City Police Department, to the AP news agency.