Police raids begin in Cuenca, Loja and Ambato for the beginning of classes 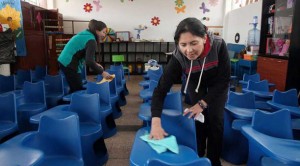 Today the school year starts in the Highlands and the Amazon. For this, police raids have been organized in campuses of Cuenca, Loja and Ambato.

In Loja 60 traffic civilians agents will be watching while in Ambato there will be 102 agents. They will join the police. The arrangement will continue throughout the week.

For the new school year 2014, the Government distributed 129,782 desks with a USD 6 310 798 investment in Chimborazo, Cotopaxi, Tungurahua and Pastaza. In addition there are pending tasks in the construction of classrooms and computer labs equipment.

In total, USD 9.57 million were invested in the three provinces.