The parties and political movements demanding that the Consultative Council of Political Organizations throw certainties about the organization of the elections of the 2021 . The forum will take place this Thursday, June 11, 2020 in a virtual way, for the first time, due to the pandemic. 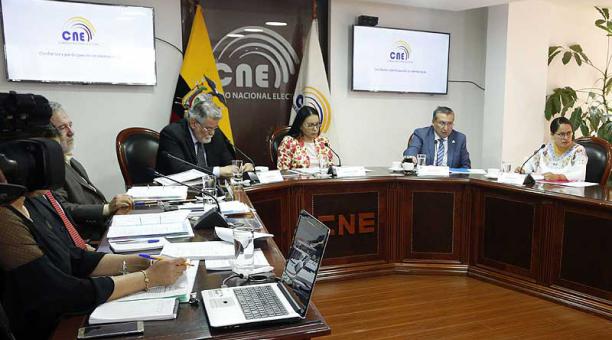 Among the points to be discussed are the forms of voting , based on the social distancing that the presence of the new coronavirus implies .
The event will also analyze the proposals for the regulations that will serve for the renewal of directives, appointment of candidates and electoral alliances.

According to the president of the National Electoral Council (CNE), Diana Atamaint, this will be a space for political organizations to propose suggestions or observations to the proposed agenda and consensus can be generated.

Eight months after the scheduled date for the elections, for representatives of the Social Christian Party (PSC), Creo, Izquierda Democrática (ID), Suma, among other groups, the rules are not clear.

The questions start from the calendar that was approved by the CNE on March 12, four days before the Executive decreed a health emergency due to the pandemic in the country.

César Monge, president of Creo , confirmed that this movement will participate in the Advisory Council because he fears that the process is “riddled with errors”, since he pointed out that Ecuador must face a new electoral reality.

The PSC is concerned that transparency is jeopardized . César Rohón, Assembly member of this party, considers that “the times are running”, in front of an uncertain scenario.

“Ecuador needs certainties, clarity and determination from the CNE on how the elections will advance.”

Rohón demanded that the CNE update the computer system to guarantee the results , if a new one cannot be acquired due to the economic crisis .

ID Assemblywoman and leader Wilma Andrade believes that the Advisory Council is important because it will achieve general criteria for decision-making.

The CNE must adhere to the deadlines established in the Constitution and the Democracy Code , including that the call to the polls must be made at least three months in advance.

These norms do not contemplate the possibility of applying “force majeure”, which prevents modifying the date of the election day. The virtual modality for the processes is not foreseen either.

“All that has gaps with respect to what is being analyzed right now, that is key and we must find a quick way out of the country and that should be to consult the Constitutional Court,” Andrade said.

Councilor Luis Verdesoto believes that the Advisory Council should put on the table the need to set a new electoral calendar . “The date that cannot be moved is May 24, 2021, the day of possession. All the rest can be moved within the Law ”.

Verdesoto said that the approved calendar should not govern, since the pandemic changed activities and today several organizations are against the sword and the wall.

The current calendar contemplates that, between August 9 and 23, the parties and movements must carry out their internal elections , despite the fact that the coronavirus altered the way of doing partisanship.

Despite the fact that the CNE has not yet issued the regulations , some groups are already taking virtual steps to structure their bases. They have also dedicated themselves to consolidating some of the possible candidates.

The ID prepares its national assembly to renew the directives in July. Andrade said that this will be virtual and not face-to-face as previously done.

The PSC hopes that this month its leader Jaime Nebot will decide whether or not he will participate as a presidential candidate. If the answer is negative, list 6 should look for a new figure.

Instead, Monge said that Creo’s presidential candidate will be Guillermo Lasso . He has led the structuring of the bases in all the provinces virtually. “We are ready for our internal process, in August.”

According to the current calendar, elections will be called on September 17 . And the first electoral round is scheduled for February 7.

The CNE also does not define the budget that will be required for the elections in which the Andean President , Assembly members and parliamentarians will be elected . This will depend on the form of voting that will be debated in the Advisory Council.

There are two options: voting by segment so that citizens can go between two and three days to the polls or a modality that combines online and face-to-face voting, which is defended by the CNE minority councilors.

The Democracy Code requires the Advisory Council to convene before the elections. It is a space for dialogue between the CNE and political parties and movements. For the first time it will happen virtually due to the pandemic.