Cantons such as Tulcán or Pallatanga start from today, June 8, 2020, with the yellow light . Throughout the country, there are already 111 towns in this stage of the emergency. 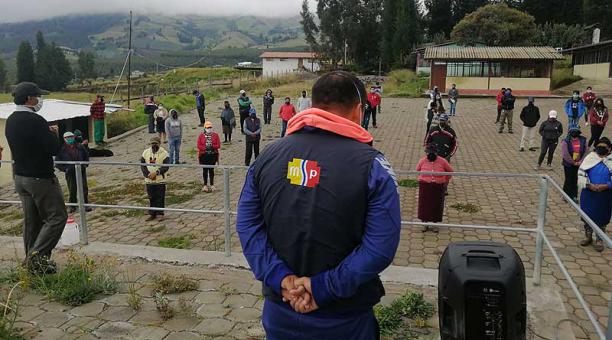 With the latest changes, three provinces already have their entire territory in this phase: Cañar, Santo Domingo and Santa Elena. There are only two cantons that remain green .

Cayambe will be the last jurisdiction of Pichincha to leave the red. Yesterday, June 7, Mejía did it .

The Mayor’s Office of this canton announced that intercantonal transport starts operating again today , under new regulations such as the use of a mask for passengers and more distance between the seats of each bus.

The opening of the collection windows for the drinking water service is also scheduled for June 8 . The Central Market will attend from Monday to Friday from 08:00 to 17:00 and on Saturdays from 08:00 to 14:00.

The Cayambe cantonal emergency operations committee (COE) approved the change to yellow for next Wednesday, June 10.

In recent days, about 500 stores , warehouses and restaurants in this town, in the north of the province, were inspected by technicians from the Municipality prior to the start of the new traffic light.

The mayor, Guillermo Churuchumbi, was on the tours and noted the measures taken in each location.

Preventive measures were spread in the shops and restaurants of Pallatanga. Photo: courtesy of the Municipality of Pallatanga

Before these evaluations , protocols were established and approved for the reopening of small , medium and large companies.

Leonardo Torres, director of Citizen Security of the council, explains that to go to the new phase , the reports of the different technical tables of the COE were reviewed .

Delegates from the Fire Department, Red Cross and the Municipality, give talks to prevent the spread of covid-19 and give suggestions for the ‘new normal ‘. 1,800 neighborhood and community residents attend these trainings.

Public transport will be enabled progressively from June 15 next.

The commercial activity of Tulcán reopens on Monday June 8 with the change from red to yellow. It is the second canton of Carchi to change its traffic light color, which, among other things, seeks economic and productive revival .

This week, officials from the Municipality inspected different commercial premises to verify the measures they must comply to serve the public.

Gabriela Gualpa, owner of a clothing store, says that she incorporated the use of protective suits, masks and visors for all staff.

In this city it is estimated that there are 3,000 businesses that operate in different areas. Álex Chamorro, president of the Chamber of Commerce, assures that this reopening was requested several days ago.

The three urban transport operators will start operating with 50% of their capacity.

In the Sierra Centro , more cantons are preparing to change to yellow. In Chimborazo Pallatanga, Alausí and Colta started an information campaign on the measures to be adopted in the new phase.

Pallatanga starts today in yellow. Firefighters, municipal technicians and police visited the commercial establishments to train their owners on the correct prevention measures.

Five positive cases of covid-19 were detected in that canton south of Chimborazo , three of them died and two had already been discharged.

“We have only five people within the epidemiological fence and there have been no new cases, so the cantonal COE decided to go yellow. Now we need to reactivate the economy, “said Enrique Granizo, mayor of Pallatanga.

In Bolívar , the cantonal COEs of Guaranda, Echendía, Las Naves and Caluma debate on the change of traffic light . There the contagion curve stabilized but new cases continue to appear, so the authorities plan to wait another week.

In Los Ríos , the commercial sector is authorized to serve the public until 18:00 in Babahoyo . Five cantons are in yellow in this province.

The farmers certificates can circulate in their vehicles regardless of the last digit of your plate in the canton. Babahoyo started in yellow light last week.

The movement is not permitted between cantons .

On May 4 last, the 221 districts of the country began with the phase of social distancing with red light. Currently only 108 remain in this phase. Since June, new regulations were established for the three types of traffic lights.