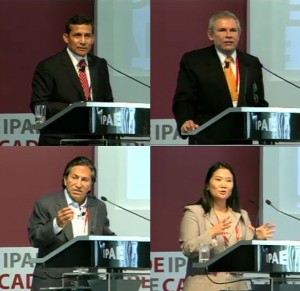 According to a poll released by Ipsos-Apoyo Company in Lima, the leftist candidate Ollanta Humala leds the Peruvian electorate for President, followed by Congresswoman Keiko Fujimori and former President Alejandro Toledo, in a triple tie.

In a simulation card voting by secret ballot and polls by the firm Ipsos-Apoyo, Humala reaches 21.2% of the votes while in second place there is the daughter of former President Alberto Fujimori with 20.7% followed by Toledo with 20.1% of votes.

Pedro Pablo Kuczynski, former finance minister in the government of Toledo, takes position fourth with or 14.6% while the former mayor of Lima, Luis Castañeda is increasingly relegated to fifth place with 13.9 %.

To make this survey 1,986 people were consulted nationwide between March 19 and 25 with a margin of error of 2%.

These figures form a technical tie two weeks after the first round of elections to e held in April 10th, makes the results unpredictable.