Pope Francis leaves an open door to talk about celibacy 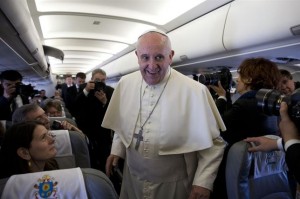 Pope Francis leaves an “open door” in the reform of priestly celibacy in the Catholic Church, a perception that he informed to the press during his return from the Holy Land.

“The Catholic Church has married priests. Greek Catholics, Coptic Catholics … it is in the Eastern rite,” the Pope said when he was asked what he thinks about the priestly celibacy practice in the Western Church.

“Not being a dogma of faith, there is always an open door”, the Pope concluded.

These statements were given after a group of 26 women asked him in a recent letter for a review of the celibacy discipline, since they have lived or live in a relationship with a priest and would like to do it without hiding.

Pope Francis asks for free access to the Holy Places