Pope Francis starts today his journey to the Holy Land 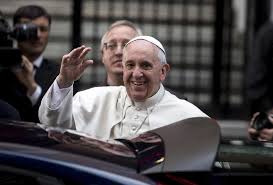 Pope Francis begins today ,May 24, his journey to the Holy Land where he will visit Jordan, Palestine and Israel. This trip will have many political and religious challenges to the pursuit of dialogue and peace among the people of the Middle East.

His trip will last until May 26 and  he will visit Jordan first, then Bethlehem and finally Jerusalem. This will be the second international trip of Francis after last July, when he went to Brazil for the World Youth Day.

The main topics that will be addressed by the Pope are: the Israeli-Palestinian conflict , the war in Syria and the role of Islam in the Middle East .

“On Saturday begins my journey to the Holy Land , the land of Jesus . It will be a strictly religious journey” said Francis on  wednesday during the General Audience.

Pietro Parolin, the Vatican Secretary of State , said that this trip also has a political purpose : “Part of the Pope’s desire is visiting the places where Jesus lived, but one of the most tangible benefits expected from his mission is to be a help when making courageous decisions in the way to find the peace throughout Middle East”, he said.

This journey is to reiterate his wish of peace between Jews and Palestinians, as well as promoting greater dialogue between the three great monotheistic religions : Catholic, Jewish and Muslim .

The Pope will be on May 24 in Jordan, where he will visit the traditional site of Jesus’ baptism in the Jordan River, then, he will meet with Palestinian leaders in the West Bank to celebrate a Mass in Bethlehem. In Jerusalem, he will pray at the Holy Sepulchre of Jesus, and will visit the Mount Temple, the third holiest site in Islam, and the Wailing Wall, one of Judaism ‘s holiest places .

In Amman , the first stage of his papal tour, will be received by the King of Jordan. He will celebrate a Mass at a stadium and meet with 600 disabled and refugees, many of them Syrians.

On Sunday 25 May, in Bethlehem, the Pope will meet with the President of the Palestinian National Authority (PNA ) Mahmoud Abbas and greet the crowd of Palestinian Catholics .

The last day would be the most difficult for Pope Francis. Bergoglio will visit the Mount Temple, the Dome of the Rock and the Muslim Supreme Council accompanied by the Grand Mufti of Jerusalem, Mohammed Hussein.
In this short but intense journey of less than 72 hours, the Pope will deliver 14 speeches and he will also visit Syrian refugee camps in Jordan, Palestine and the West Bank .

Francis will travel by helicopter or in a car without armor, and in some cases in an all-terrain convertible.

Pope Francis asks for free access to the Holy Places