Last Sunday during a visit to Albania, Pope Francisco denounced the use of religion as a “pretext” to justify violence, referring to the growth of jihadist movements in the Middle East and Africa.

“Let no one think that they can hide behind God when they design and make acts of violence and abuse. Nobody should take religion as a pretext for their own actions contrary to human dignity and its fundamental rights,” the pope said to the leaders of the country when reaching Tirana, the capital.

Albanian Prime Minister, Catholic Edi Rama, welcomed the Argentine Pope, who also received the fervent reception of hundreds of thousands in the square of Mother Teresa, where he held a Mass before 250,000 people.

The Pope, who thinks Albania is a “model” of interfaith coexistence, noted that “the climate of mutual trust and respect between Catholics, Orthodox and Muslims is a precious asset for the country and takes on special importance at this time.” 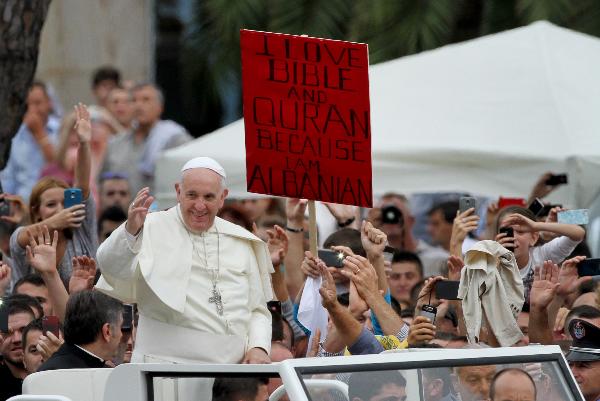 Pope Francis is greeted as he arrives to celebrate a mass at Mother Teresa square in central Tirana.