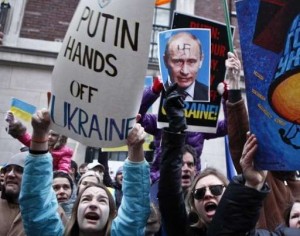 G7 leaders requested to Russia on Tuesday to stop “all efforts to change the status of Crimea”. Otherwise, they promised to retaliate.

The seven economic powers (Germany, Canada, USA, France, Italy, Japan and the UK) claimed to Moscow to withdraw its troops from Ukraine, to allow the entry of international observers in Crimea and to enter into negotiations with the new authorities of Kiev.

“In addition to its consequences about the unity, sovereignty and territorial integrity of Ukraine, the annexation of Crimea would have serious implications for the international legal order,” Leaders noted in a statement released by the White House.

“If Russia would give such a step (the annexation), we will take further actions, individually and collectively,” said the statement.

The G7 considers that the referendum summoned for this Sunday in Crimea about the integration to Russia “would not have legal effects” nor moral.