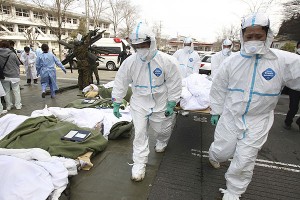 Fukushima nuclear power plant reached a critical stage after the fire and explosion in reactor No. 4 wich led a mass escape of radioactivity and the declaration of an air exclusion in a radius of 30 kilometers.

The worst situation appears to be concentrated in reactors 2 and 3 of this plant. Today there was an explosion that has not only damaged the building of unit 2, but affected their containment system, marking the level of radioactivity in 8217 microsievert (mSv), only at the entrance of the plant, which is above the 1,000 mSv per year limit established as safe.

Meanwhile, in the vicinity of the reactor unit 3, which also suffered yesterday a hydrogen explosion, the radioactivity was 400 times the level considered safe.

The fire in the pool unit 4 (apparently caused by a hydrogen explosion) caused the levels of radioactivity were to exceed one hundred times the permitted limit, but then declined, the minister spokesman, Yukio Edan, denied that there a leak in this reactor.

Residents within a radius of 20 km around the plant, which is about 200,000 people, were evacuated since the weekend while today the government extended the warning area to 30 miles. This radio has been declared a no-fly zone. In addition, the remaining inhabitants between 20 and 30 miles from the plant have been urged not to leave their homes, close windows, and turn off ventilation systems