The former technological capital of the world has been transformed in a post apocalyptic scenario. Thousands of people along the northeastern coast of Asia are dead, and tens of thousands have lived for several days with little food and water. The earthquake has obliterated the towns and its remnants were washed away by the tsunami. 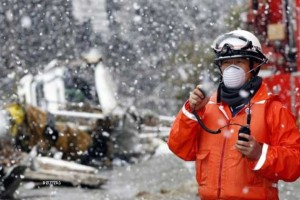 Meanwhile the nuclear emergency has caused panic among stocks traders, and many foreign companies have fled the country. The rest of enterprises have a deep concern regarding its residents and the radiation exposure. Last Friday two earthquakes struck Japan, the event caused the growing crisis at the Fukushima Daiichi nuclear power plant and now several plants have malfunction problems.

Recently the search and rescue operations have more another difficulty, the cold weather that now assails the nation is hindering their operatives.

Several companies and embassies realized that Japan is too dangerous right now and are leaving the country. The Chinese Embassy in Tokyo started to evacuate its citizens near to Fukushima, and several foreign airlines in China and Taiwan will cut back their flights to Japan. Prime Minister, Saoto Kan warned about the radiation risks and ordered those outside the radius of the Fukushima plant to remain indoors. The radiation readings of the nearby area revealed a very high risk of contamination.