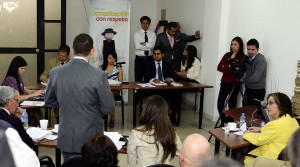 The announcement of an amendment to the Communications Law, that would harden the penalty on the ‘media lynching’, generated criticism in lawmakers of (AP) and the opposition.

The Superintendent of Communication (Supercom),Carlos Ochoa, said that a draft amendment to the Communications Law is being prepared; one of them would give ‘dosimetry’ to the current penalty for the ‘media lynching’, an established figure in Article 26 of the law.

The rule prohibits to disseminate repetitive information in order to discredit a person and reduce his credibility. The current penalty is a public apology.

Legislator Angel Vilema (AP), said: “We believe this is a law that is being implemented in a good way, the media harassment is well sanctioned. Perhaps with the experience and the foundation that the Supercom submits, we could analyze this reform”.

Assemblyman Ramiro Aguilar (before SUMA) noted that if it falls into the hands of the legislature, it will be discarded by incoherent because “it is an administrative penalty and the only step up it could have is to include it in the Criminal Code”.

Luis Fernando Torres (PSC-Cambio), also believes that radicalizing this infringement “would break the principle of proportionality established in Article 76 of the Constitution”.