Prefects disagree with the wage categorization 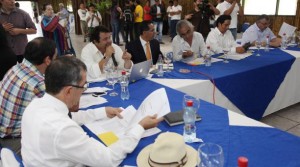 12 prefects and four vice prefects, who conform the Consortium of Autonomous Provincial Governments of Ecuador (Congope), discussed the agreement MDT- 2015 -0042 of the Ministry of Labour, in which is comprised that the wage ceilings of the prefects would be in grades 8 , 7 and 6, which are the same levels of ministers, deputy ministers and undersecretaries currently.

The agreement of the Ministry of Labour is a proposal that has not yet entered into force or has been published.

In the agreement the salaries of prefects are stratified according to categories A, B and C. For this, provinces will be measured considering the size and density of the population, the criterion of unsatisfied basic needs, achievements in improving life, physical capacity, administrative effort and compliance goals. This assessment is done according to Section 195 of the Organic Code of Territorial Organization, Autonomy and Decentralization (COOTAD).

The prefect of Chimborazo Mariano Curicama said that there is no opposition to the wages reduction, but to the undermining of Prefectures autonomy. “You can not compare a minister who was elected by the Executive branch with a prefect who won by popular election.” In the case of Mariano Zambrano, prefect of Manabí,, his current salary is $ 6,356, but if the pay cut was given, his salary would be $ 5,510 just as the prefects of Guayas and Pichincha.