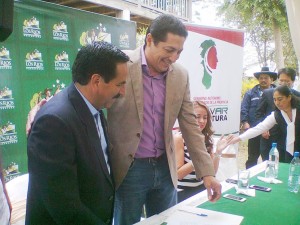 Prefects have been talking to solve the border problems they face. Last Thursday, President Rafael Correa called on local authorities to solve their problems within the period provided by the law, until April 2015. “This cannot last longer”, he said.

On Thursday, the Prefects of Los Rios, Marco Troya, and from Bolivar, Vinicio Coloma, signed an agreement in Babahoyo.

“We will not fight for an inch of land; We’re talking about border problems between brothers”, said Marco Troya, Prefect of Los Ríos. He also noted he will sign a similar document  with his counterpart of Cotopaxi, Jorge Guamán.

The Prefect of Guayas, Jimmy Jairala, on Thursday pledged to Coloma to establish “direct negotiations” to resolve their disputes.

However, Jairala said he did not see “very friendly Azuay´s position,” referring to incidents in Abdon Calderon, area that is claimed by Balao (Guayas) and Cuenca (Azuay).

Guayas Prefect and Paul Carrasco, Prefect of Azuay, resolved to meet next Tuesday in Cuenca, to address the issue.