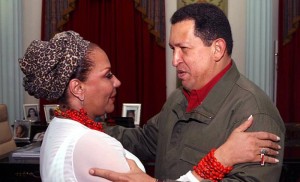 Colombian Senator, Piedad Córdoba was accused of cooperating with the FARC and thus was disabled for 18 years. President Chávez qualified the judicial action as infamy. “I feel sorry for this because I know Piedad.” The Venezuelan leader made the following statement during a press conference “she loves peace like me, but she loves more the peace of Colombia.”

Chávez said that he knows for sure that Córdoba is innocent against any charge that links her with terrorism. Stating “I believe this is an infamy because this woman has risked her life, I have seen it. She cried with families rescued from the jungle, her anguish for Colombia. She is a woman in all the sense of the word.” The Venezuelan leader believes that the accusation against Córdoba is because of the computers of the former FARC member “Raul Reyes.”

The Public Ministry of Colombia dismissed Córdoba from the Congress and disabled her from exercising any public charge for 18 years due to her connections with FARC. During the last months she played an important role for the release of hostages that where prisoners of the terrorist group.