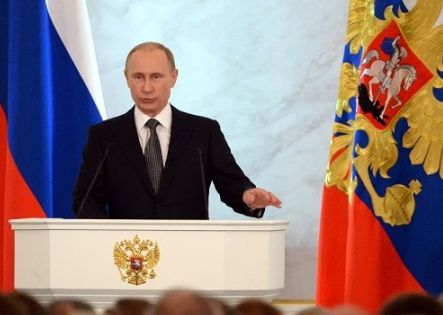 Then Russian President Vladimir Putin lashed out this Thursday against western attempts to contain Russia, he acknowledged that economic sanctions have hurt the country and announced plans to strengthen ties with Latin America.

During his speech on the state of the Nation before both houses of parliament, Putin acknowledged that international sanctions are “harmful” to Russia, but said that even without the annexation of Crimea and the crisis in Ukraine, the West “would have found another pretext” to impose them.

“Now we are trying by all means to convince that this is the most weighted and correct policy, and that we must be subordinate blindly and without thinking. This will not happen,” said the President.

Putin again criticized the United States, by stating: “It is not by chance that I have mentioned our American friends, as they have always been influencing our relations with neighbours directly or behind-the-scenes.” However, he made it clear that “under no circumstances we consider suspending our relations with Europe and the US.”

“Talking with Russia from a position of strength is useless. “The policy of containment was not invented yesterday. It has been carried out against this country for many and many years — always, if one can say. For decades if not centuries,” said Putin.