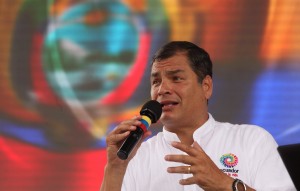 President Rafael Correa insisted this Saturday, December 13 in his criticism against the Vice Mayor of Guayaquil, Domenica Tabacchi, after the controversy aroused by his expressions during the last weekly address. But he said his message was distorted and he expressed no discrimination against her.

Correa said that his message was the rejection of people who feel superior by the color of skin, eyes or family name. “That’s been the story of our elites.”