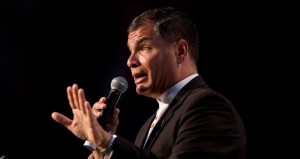 Through his Twitter account, President Rafael Correa played down the criticism of British comedian John Oliver and considered that the issue “does not deserve one more second of our time.”

“John Oliver Subject: much ado about nothing. Those`gringo talk shows´ are more unpleasant than a diuretic, and ‘English comedian’ is less than an oxymoron,” wrote the president in 4 tweets.

Correa tweeted these messages yesterday morning from the Santa Rosa airport (El Oro), while waiting for his helicopter to travel to Alamor (Loja), where he would participate in the inauguration of the Axis Vial No. 2 highway, which links the south of Ecuador and the north of Peru. But he could not travel due to the bad weather.

In an issue of the Last Week Tonight with John Oliver, broadcast by the HBO Network, the host dedicated some minutes to criticize Correa´s reactions in social networks.