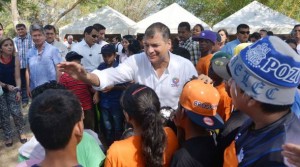 President Rafael Correa in his last working day of 2014 celebrated on December 23 with children from Guayaquil and Duran,assisted by the Ministry of Economic and Social Inclusion.

Correa arrived to the Parque Lago (km 26 on the way to the coast) and had breakfast with the children from the program to eradicate child labor and begging.

The event was also attended by Minister Betty Tola, who said that from 2010 to 2013 the begging was reduced at 80% and thecampaign Give dignity (Da Dignidad, for its Spanish name) is having good results. “We have changed the charity focus of thetelethon at establishing this in a public policy that seeks to restore the dignity of people.”

Whereas the President said that child labor is not part of the folklore and they work to fight it.