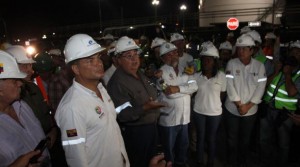 During his tour in the Esmeraldas refinery, the president revealed part of the conditions of the advance sale of oil to Thailand.

The president said that the interest rate within the operation is on the order of 7%. “It is even a little lower, but including the commission it is about 7%.” Regarding the term, Correa said it would be least five years. Meaning that the 116.64 million barrels will be delivered to PPT in that period.

He added that the cost of oil extraction in Ecuador is between USD 35 and 39 according to official data. He also said the presale of crude will be supplied by production from existing fields.

Last week, Petroecuador reported that it had signed a purchase agreement with the oil company PTT of Thailand in which it pledged to sell 116.64 million barrels of Oriente and Napo crude. In return PPT committed to provide an advance of USD 2 500 million.