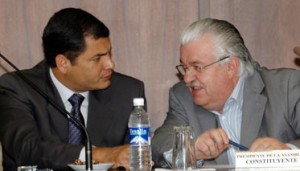 Alexis Mera, legal Secretary of the Presidency, said in an interview with radio Sonorama that he regrets the departure of Fernando Cordero, and clarified that his departure had nothing to do with the resolution 464, which creates the obligatory affiliation of persons without labor relations in dependence. In addition, he said that “in the coming hours President Rafael Correa will define the theme of change” about who will lead the IESS and Biess.

President Rafael Correa also pointed the possibility of Cordero occupying a public office. While the decisions are confirmed, Cordero continue officially in functions, in the IESS and the Biess.
Both institutions are operating normally, said Eduardo Moreno, Manager of the financial institution and explained they are working on a regulation which give credits for amounts up to $30,000 in a 30-years term for people of lower economic resources. To do this approval from the directory is still neaded.