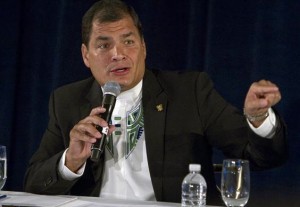 President Rafael Correa announced the suspension of a scheduled trip for the second half of this year to Israel and the Palestinian territories due to the conflict that occurs in Gaza .

In an interview regarding the conflict, Correa stated: “it must be denounced with all our strength the genocide that is being committed.”

“I intended in the second half to visit Israel and that visit was planned, Palestine too. Obviously after these events we have canceled that visit ,” he mentioned.

He also stressed that Ecuador “was the first South American country or one of the first to withdraw its ambassador. Peru, Brazil, etc. followed us”.

“What is happening in the Gaza Strip is a slaughter. Who can justify that? ” He asked, indicating that in the conflict there are deceased women are children, especially Palestinians.