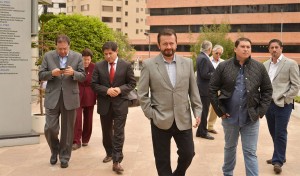 Elections to decide who will be the future president and vice-president, assembly members and Andean Parliamentarians will be held on Sunday February 19, 2017, with a budget of $ 131.5 million, according to the report on the Electoral Operational Plan (POE for its Spanish acronym), the plenary of the National Electoral Council (CNE) expects to aprove today.

If necessary, the runoff election would be held on April 2, says the proposal.

The report estimates there will be 13.1 million voters in the country and abroad, who will vote in 44,510 polling stations (JRV).

The electoral process of February 2014, in which the authorities of the Autonomous Decentralized Governments were chosen, cost $ 137.3 million; and the February 2013 elections cost $ 95 million.