Pressure on criminal judge is denounced 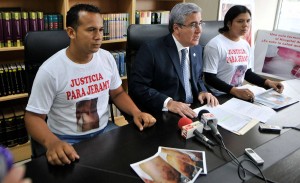 The Guayas Provincial Prosecution opened an investigation for alleged interference during the course of a criminal process followed against eight health professionals, including two doctors of Cuban nationality.

Those involved are under investigation for the death of Jeramy, a newborn who suffered severe burns last April, apparently in the hospital crib in which he was transferred from Milagro to Guayaquil.

Juan Vizueta, attorney for the child’s parents, reported that last Thursday December 10, seven days before the ruling hearing and preparatory for the trial, an alleged official of the Judicial Council would have exerted pressured on the judge of the Criminal Judicial unit South Valdivia, Juan Carlos Vizuete Leon, to release the foreign doctors.

The judge, according to a document presented by Vizueta, refused the petition and made the incident clear in a ruling. “At 09:00 an unidentified man who arrogantly claimed to be of human resources entered to my office (…) ordering me to release the Cuban citizens …

Environment Minister is pessimistic opposite outcome at climate summit