In the jean pants store owned by Nubia Llerena , located in the El Tambo neighborhood , there are no buyers. 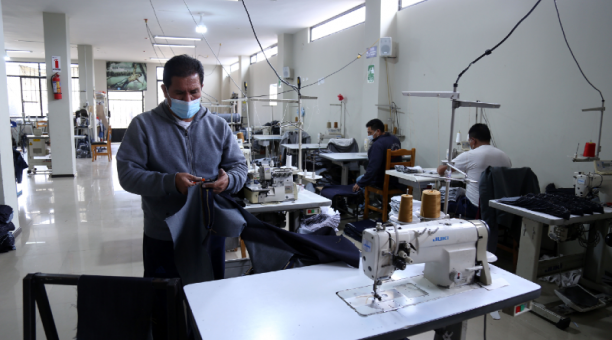 It is something atypical for a Friday at noon, since until January customers were observed in this area of ​​the Pelileo canton . The 50-year-old woman laments that the sale of clothing has declined since February 2021.
The owner walks from one place to another in her small store, El Fabrica , and tells about the few sales.

On the Easter holiday, he barely sold four pants, at USD 8 each, and he still cannot raise the money to pay the suppliers of shirts, T-shirts, sweaters and other clothes that he sells along with the jeans he produces in his small factory. . It is USD 5,000 in debt and due to the lack of sales “I think I will return the merchandise.”

Theproduction workshop is also semi-paralyzed . Llerena made 600 jean pants a month, now just 100. Due to the crisis, she was forced to suspend work for four of her collaborators. Her husband and sometimes she herself perform the tasks that her employees did.

He does not close the business because he paid in advance the rent for a full year, which reaches USD 5,000. “Here they charge us that way; I hope the situation improves, to recover the investment ”.

Llerena has not been able to get a loan. He made the formalities in the public bank and presented the documents, but – he points out – they put obstacles on him; That is why it withdrew from a loan of USD 10,000 .

A report from the pre-association of Almacenes de El Tambo reveals the crisis. Sales fell by 85% in the last two months. This caused 80 of the 200 commercial premises located along Confraternidad Avenue, at the entrance to Pelileo , to close their doors permanently.

Byron Martínez, president of the pre-association of Almacenes de El Tambo , comments that the economic crisis is serious for this sector of the canton, which generates labor. Carnival, Easter and weekend fairs did not help improve sales . “That also affects the owners of the clothing workshops, because production declined.”

In Pelileo there were 600 workshops and 20 factorieseven before the pandemic.

The downturn in the Pelileo textile sector began five years ago, but worsened with the indigenous strike in October 2019 and the COVID-19 pandemic, indicates the leader.

During the confinement between March and May 2020 , the premises and workshops closed their doors until last June they decided to reopen them, but some were left without capital, and that forced them to close again.

Martínez says that in December 2020 they barely managed to recover 40% in sales, but it declined again in February 2021 . “This happened because the priority of families today is to invest in health and food, the purchase of clothing is in the background.”

The production of jean garments also declined. That had an impact, according to Martínez, in the dismissal of the workers. Although there is no data, he gave as an example that before in the warehouses between four and up to five people worked, and now there is only one.

A few steps from the Llerena store, crossing the four-lane road that looks empty, is the Cisgab factory, by Santiago Cisneros . The microenterprise was founded by his parents, Hólger Cisneros and María Gavilanes, 29 years ago.
The businessman sold 20 pieces of clothing in a week, which is not enough to pay his workers.

Last year, Cisgab Jeanit produced 800 pendas a month and employed more than 30 people, through the maquiladoras that were in charge of assembling the pants.

With sales declining, he decided to keep just three workshops. “Sales are minimal and there are no sales in the markets of Caraguay, Guayaquil, Manta and Durán , where we distributed the merchandise. We are keeping production ”.

The same story lives the Montana Creaciones factory, by Iván Montaguano . I had not experienced this complicated situation before, despite having been in the jean market for more than 30 years.

His father, Julio, started the company; he and his brothers run this business. He says that sales fell and the economic crisis affects them.
The monthly output of the 15 workers reached 6,000 garments, but now it has been reduced to 1,000 garments and with only four employees.

Municipality of Palora assumes a fee for pitahaya, which will finance fruit fly monitoring