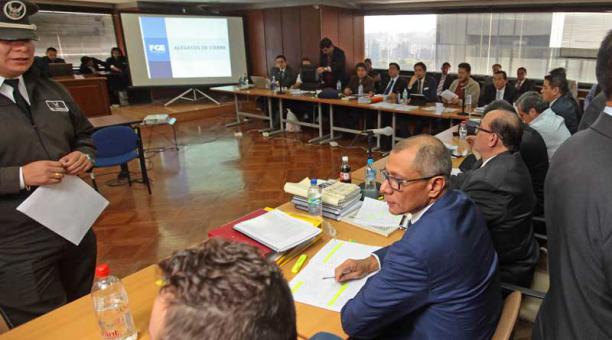 The prosecutor Carlos Baca made a detailed explanation about the participation of Jorge Glas. He used a block of slides to explain that the Vice President had ‘full control’ of the strategic sectors, that he favored Odebrecht through the ‘political power’ that he held, and that his uncle Ricardo Rivera ‘acted’ as an intermediary. Thus began the final arguments phase on the thirteenth day of the Odebrecht trial.

For Baca, it is demonstrated that the Second President had ‘power’ in the five projects that are currently being investigated. In this group are the Manduriacu hydroelectric plant, the removal of land in the Pacific Refinery, the La Esperanza Aqueduct, the Pascuales-Cuenca Poliducto and the Daule-Vinces Transfer.

With this background, Baca asked the Criminal Court the maximum punishment for the Vice President, as the author of an illegal association. And he cited article 370 of the Criminal Code that governed before 2014. According to that norm, this crime is sanctioned with jail from three to six years. To endorse his request, the Prosecutor summarized part of the elements that point to Glas as the alleged author of the corruption plot.

He recalled that in July, Tomislav Topic, owner of Telconet, delivered, as evidence, USD 2 million that he said he had received from an ‘unknown sender’, in 2010. That payment apparently was for the intermediation of Rivera in a business between Telconet and Odebrecht.

In September, from Brazil, José Conceição Santos, former director of Odebrecht in Ecuador, said he canceled USD 2 million for the return of the construction company to Ecuador, following the incidents at the San Francisco plant. In his story, the Brazilian said that Glas “made this return” viable.

On Thursday, Baca spoke again about the Glas-Rivera relationship and said that it “went far beyond the family bond”. And he remembered the video in which the Vice President’s uncle asks for “money for the Glass campaign.” The prosecutor also mentioned that the Second President had an official trip to Brazil in 2011. He presented a portfolio of projects to companies in Brazil, including Odebrecht. He added that Glas even sent a letter to the Government of that country, requesting credits for two projects qualified by Ecuador as priorities: the Manduriacu plant and the Daule-Vinces Transfer.

The official said that four months after that office, in December 2011, Senplades recently qualified those projects as priorities. “All the works where there were bribes were in the strategic area,” said Baca in his presentation. In the final minutes of his participation, the Prosecutor spoke about the emails that Glas and Rivera came across on the subject Glory International Limited Corporation.

This ‘offshore’ received money from Odebrecht and is also related to Glas’s uncle. In the ‘mails’, the Vice President tells his uncle that an investigation done abroad did not reveal anything illicit about Glory.

After the intervention of the Prosecutor came the reply of Eduardo Franco, lawyer of the Vice President. He began his plea by asking the Criminal Court to try this case with the current Penal Code. That norm sanctions the illicit association with jail of between three and five years. And he assured that the previous Penal Code cannot be used.

The Prosecutor’s Office used this legislation because the alleged acts of corruption began before 2014. Franco questioned the prosecutor’s investigation and said that “he never managed to prove that there was an illegal association.” And then he clarified that the “Vice President always acted within the Ecuadorian legal norm”. And that is why he asked the Criminal Court to absolve the Second President. In addition, the lawyer said that the ‘pendrive’ of Alfredo Alcívar, Rivera’s former collaborator, should not be taken into account, because there is no original source from which the data were extracted. In the afternoon, Baca presented the arguments about Rivera and Carlos Villamarín. For them he also asked for the maximum penalty contemplated in this case. (I)