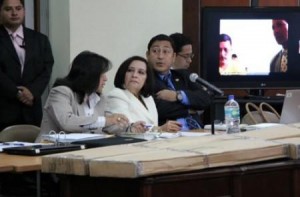 Yesterday, the Attorney General declined to accuse the former commander General of the National Police, Jorge Poveda Zuniga, within the hearing of trial of 11 accused in the case known as ‘Las Dolores’, which is investigating the deaths of eight people and three missing, during a police operation in a pharmacy in La Alborada, in Guayaquil on November 19, 2003.

Cecilia Armas, deputy prosecutor, said that the elements of conviction that the prosecution had to bring charges and an opinion are distorted. In addition, the defense of the former commander failed to show, that he verbally appointed Edward G., to a service commission in Guayaquil; and that Poveda sent the report conducted by the Inspector General of Police about what happened in the Fybeca pharmacy to the Minister of Government of the time and to the police.

The defense was not satisfied with the argument and requested a public apology by the Prosecutor’s Office and relatives of those killed and missing in the police operation in November 2003. “When mistakenly an innocent has been accused in this trial, and the own Prosecutor’s Office itself has recognized this, the least that should exist is a public apology in general”, said Anibal Tamayo.

Juan Pablo Albán, sponsoring attorney for the three Dolores, said that they are not going to get on their knees and apologize for seeking justice. “Who must assume responsibility will do it”, he said.

The Criminal Court of the National Court of Justice (CNJ) issued on Thursday at 10.00, its judgment with respect to 11 people, including policemen and civilians, who were called to trial in the case of Las Dolores, a process that investigates alleged extrajudicial executions and enforced disappearances.

So far, there are five accused as perpetrators of murder, and three have been identified as accomplices.