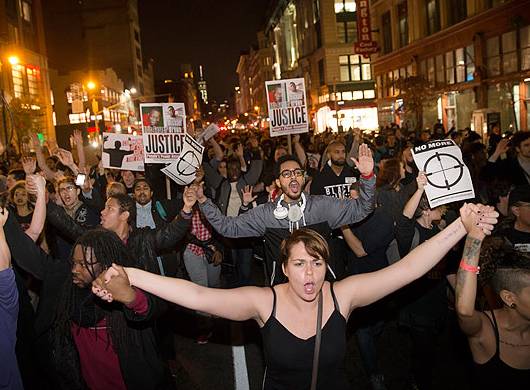 Protesters on the streets of New York. AP

For the second consecutive night, thousands of people demonstrated in the US to claim for the decision of a grand jury of acquitting the white policeman who killed the Afroamerican teenager Michael Brown last August in Ferguson, Missouri.

In New York, the police used pepper spray to control the mass after protesters tried to block the Lincoln Tunnel and the Triborough Bridge and marched to Times Square.

The protesters, from all races and mostly young people chanted mottos like: “No Justice, No Peace” and “Hands up, do not shoot,” used in the latest protests against the police brutality in this city.

In Oakland, California, and Atlanta, protesters blocked traffic while in Boston other protesters marched alongside a correctional where inmates painted on a window the name of Brown, in solidarity with the protests.

For his part, President Barack Obama called for dialogue and his Attorney General, Eric Holder, promised a rigorous federal investigation into the death of Brown.