Public debt is based on three pillars 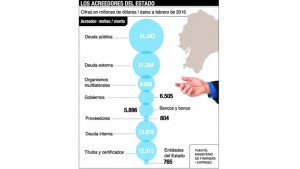 In February this year, Ecuador totaled 34,343 billion in commitments payable. Of that amount, about 54% are of three creditors.

Who are they? China, the Inter-American Development Bank (IDB) and the Ecuadorian Social Security Institute (IESS). Together they total about 18,800 million dollars.

The IESS, according to the Undersecretariat of Public Finance, has an outstanding public debt collection of 762 million dollars with “state agencies.” About 7,500 million in government bonds acquired by Social Security are added to this.

IESS authorities defend the purchase because according to them, bonds are reliable and the Government does not record arrears. Richard Espinosa, chairman of the institute, highlighted the profitability generated by the public papers.