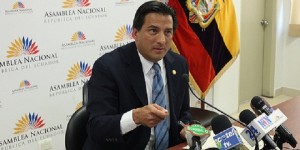 The Public Safety Institutions Law arrived at the International Affairs Committee of the Assembly. These regulations had been sent by President Rafael Correa as a draft of the fourth book of the Code of Public Security and Public Order, said Assemblyman from CREO and member of the commission, Diego Salgado.

The regulations seek to standardize and strengthen four institutions: The customs police, the prison guide, forest guards and firefighters.

According to Salgado, there would be a “confusing treatment of the subject and is not attached to the Organic Law of the Legislative Branch”.

In July 2013, the first debate of the Code was made. “That law had three books, we did not know it had one more. Nevertheless, the Commission President, Fernando Bustamante, said it was the fourth book of that Code. But this should be taken as a new normative”, said the Assemblyman.