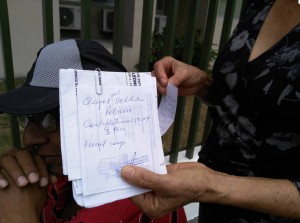 “We are stocking up, only a few medicines are arriving (…). These arrive to last a month as a contingent, while the normal process develops quickly,” said Belen Moreno, head of the pharmacy, when asked by El Universo last March.

The “normal” process to which she was referring comprises a process of 14 requirements that apply to any purchase of medicines, supplies, reagents, utensils or any medical equipment.

A process that can take three, five or seven months, even in the case of drugs for diseases like cancer and that do not appear in the basic drugs chart of the Ministry of Public Health (MSP for its Spanish acronym), for example, 200 milligrams of nilotinib.

The purchase of 43,200 capsules of the drug, vital to cancer patients with chronic or acute leukemia, was foreseen in the Annual Procurement Plan for 2015, prepared by the hospital in 2014. But only on April 5, even two months later the hospital was declared in emergency, the then manager, Maria Jesus Torres, wrote in a memo to the hiring manager, Karin Cueva Santistevan: “Procurement is approved to proceed with the acquisition.” It’s been five months and the required drug has not yet arrived.

The report is “CRUEL” says the widow of Gabela