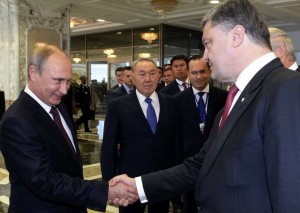 The talks between the Russian and Ukrainian Presidents in Minsk yesterday ended without much concrete progress on the conflict in eastern Ukraine.

Petro Poroshenko and Vladimir Putin met face to face yesterday for more than two hours, for the first time without mediators, on the framework of a regional summit in the capital of Belarus, where leaders of the European Union were also present (EU).

Poroshenko called for “concrete actions” and evoked the need to draw up a roadmap for a peace plan to end the fighting, which has already caused 2,200 deaths since its beginning.

The Russian president, meanwhile, said that his country is willing to “do everything possible” for the peace process in Ukraine and stressed that Moscow will not impose conditions for a ceasefire in Ukraine.

The Ukrainian president said that all parties, including Russia, supported his proposals to end the clashes in eastern Ukraine.