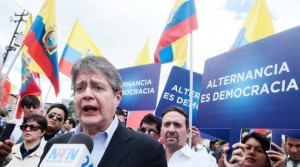 The plenary of the National Electoral Council (CNE) denied the new request for referendum for the indefinite reelection of the President and other dignitaries of popular election. This time, the rejected request came from Carlos Padron, representative of the collective Commitment Ecuador, led by Guillermo Lasso (CREO movement).

The forms request for collecting signatures, as indicated, “did not comply with the provisions of section 100 of the Jurisdictional Guarantees Act and it also lacked of the proceedings opinion issued by the Constitutional Court (CC),” according to the organism.

Sections 100 of the Jurisdictional Guarantees and Constitutional Control Act states that “any proposed amendment or constitutional reform should be sent to the Constitutional Court to indicate which of the procedures provided in the Constitution apply, specifying that when the initiative comes from the citizenship it must be done before starting to collect signatures for the respective call for a referendum.”

Given this, Guillermo Lasso said in his Twitter account: “Friends: The @cnegobec gave the back to citizens. Tomorrow we will pronounce about this.”