Quito Has a New Queen 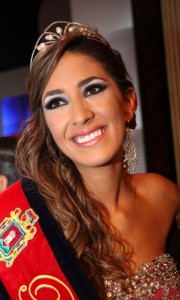 Thousands of Ecuadorians waited for the new queen of the capital to be revealed. The little shower outside Sucre National Theatre was not an inconvenient for dozens of people who witnessed the crowning event.
The 12 candidates showed their dancing skills on stage; while Sergio Sacoto and Fausto Miño sang for the audience.

The moment where only one of the candidates was going to receive the crown designed by Christian Quintero (made of sterling silver, with 15 pearls and 300 white sapphires), arrived. After tense moments, Ana Carolina Barreiro Vela was named the new sovereign of the capital. Among tears of joy, the new Queen vowed to continue the work at Patronato San José, which assists children with down syndrome and elderly people.

“My mission now is to continue working on the programs implemented by the previous queen,” said Ana Carolina Vela after being elected. The 22-year-old queen will replace Maria Caridad in the throne. Before participating in the event, Vela was a business and Marketing student; she also studied Public Relations at Webster University in St. Louis, Missouri (USA).
The new queen will also encourage the campaign “Sesenta y piquito”, which seeks to take care of the elderly. In addition, Ana Carolina received a full GT Chevrolet Spark car, a full scholarship to study at the International University of Ecuador and $ 4500 in Yanbal products.

A Rally Against Crime in Guayaquil was Heard