With the doors closed. Thus continue the Catholic churches of the capital. On the morning of Sunday, April 26, 2020, temples that before the health emergency generated by the covid-19 gathered hundreds of faithful , still look desolate . 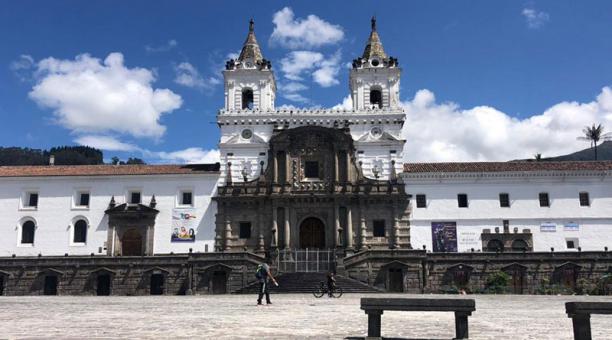 In the surroundings of those places, there is a deep silence . Usually, in these spaces , on Sunday mornings, there were hundreds of believers walking in the surroundings, there was a strong movement of vehicles , quite a lot of congestion and the inevitable presence of street vendors. But now, the reality is different.

At the foot of the La Merced church, the footprints of guests are evident: cardboard and bags wrapped a few meters from the entrance door show that there are still people who spend the night in these spaces . The so-called ‘street inhabitants’ are the only visitors to this church in the Historic Center of the capital.

In the Convent of San Francisco , the three entrances to the main door of the temple are closed. In this traditional space , the poor people who usually came to the place, waiting for a contribution from the faithful, have not returned in recent weeks.

Similarly, on the outskirts of the church of Santo Tomás de Aquino there are no images of vehicles parked on either side of the main road. The same happens in the church of La Dolorosa.

These buildings are part of the rich heritage of the District, witness the impact of the pandemic in the capital.

Some devotees ask that the temples be opened at least, with a minimum capacity, where the security measures dictated by the Government are respected . One of them is María Fernanda Quijos, who attends the El Condado Parish Church.

“I am ready to go to mass with the masks , with the scarf wrapped around my head, with everything they tell me. Also to respect the distance of two meters with the neighbors , but it is time to bend our knees again in front of the image of my God , to cry out for this nightmare to end, “says the believer.

For the return of the faithful to the churches it is expected that this week the respective protocol will be defined and delivered to the National COE for the corresponding analysis . If so, the churches could be opened from the month of May.

The Presidency Council of the Ecuadorian Episcopal Conference and some bishops discussed with the Minister of Government, María Paula Romo, in a virtual meeting held last Thursday, the opening of the temples in three phases.

The result of the appointment: from Friday, April 24, a commission would be formed to analyze the two protocols that would allow the attendance of the faithful to the churches . The analysis is given to prevent a new outbreak of the virus from occurring , once these spaces (like others in the city) open their doors .

At the meeting it was mentioned that the reopening of temples responds to the request “spirit of a people overwhelmingly Christian and Catholic “.

From the Church, mention was also made that isolation must be passed in an orderly manner. However, while defining the protocols that must be fully complied with by the faithful, people must settle for following masses and religious rituals through social networks, as has been done so far.