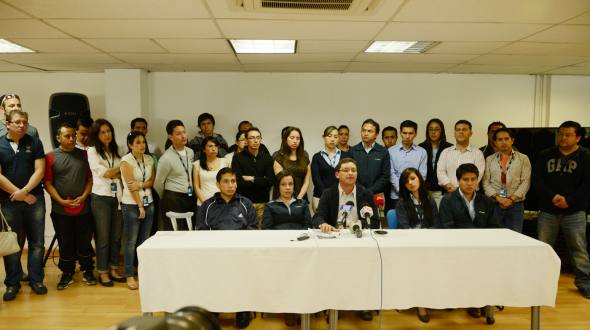 Employees of telephone companies, unions and government authorities are analysing whether the radioelectric spectrum used by telecommunications companies enter in the same category of a natural non-renewable resource. With this, it will be determined if it should be applied the reduction of profits to workers with the same legal framework used in oil and mining.

This, as a result of President Rafael Correa´s proposal of reducing 80% (from 15% to 3%) of the profits of workers in telecommunications companies. One of the arguments is article 408 of the Constitution, which places the radio spectrum in the same category of non-renewable natural resources.

However, Fernando Cordero (PAIS) confirmed the exclusion of the spectrum from the group of non-renewable natural resources in August 2008, during the broadcast of the TV program Contacto Directo.

“The radio spectrum can not be confounded with a nonrenewable natural resource (…),” said Cordero while pointing out that doubts regarding article 408 could be clarified through an interpretation of the Constitutional Court, which after all happened in 2009.

Meanwhile, Rolando Panchana, Assemblyman (PAIS) and Vice President of the table 5 of Natural Resources at then, said that the spectrum was not addressed in their table or the plenary. “This is, I understand, an good faith omission of the Editorial Committee …” justified at that time, the now Governor of Guayas.