Rafael Correa arrived to Ecuador in a private jet 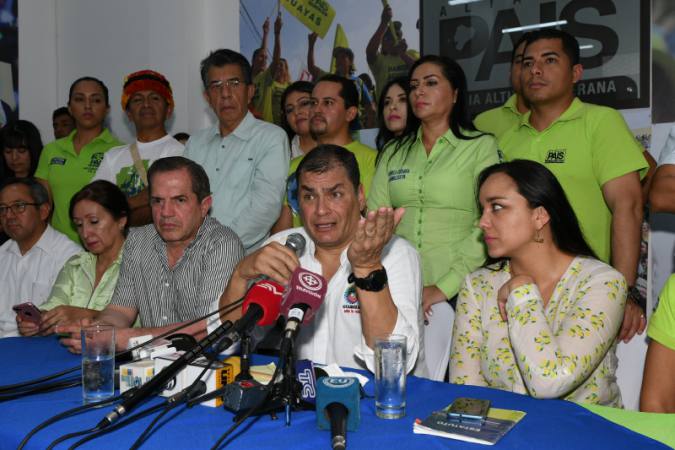 Three hours before Rafael Correa arrived in the country, a first group of his followers entered the José Joaquín de Olmedo airport in Guayaquil. Few with photos or green shirts, others without anything allusive went unnoticed in the international arrival zone.

But when the ex-commander of the Navy, Aland Molestina and Luis Serrano, of the Health and Labor movement arrived at the airport, a group of Correistas rose up to shout for Correa and against the opposition. Women led the confrontations and behind them men pushed to evict the detractors of the former president.

In minutes the confrontation arose, they used the sticks of the posters and flags to attack. There were no cops and the security of the airport looked from afar.

In the middle of the struggle, Molestina was wounded, bleeding from a small cut in the nose. Journalists and cameramen were also assaulted verbally and physically; some were robbed.

Correa´s arrival was announced at 00:50 from Colombia, as he had taken a flight from France to that neighboring country, to then fly to Guayaquil.

His friends payed a privet Jet The Bucaram left when they received information that he would not arrive at the airport. And, Correa arrived half an hour earlier than planned to a private air terminal, aboard a luxury jet and in which he was registered with his second name: Vicente Correa.

By then some of the supporters who were waiting at the airport had already moved and joined another group of correistas led by Ricardo Patiño, Doris Soliz and Marcela Aguiñaga, who said that the former president´s presence was due to a reengineering in Alianza PAIS. “Obviously we are going to have to make important decisions …”

Correa could barely greet his supporters as he approached the bars to extend his hand and then he did it from a vehicle that had to leave by another alternate route. Yesterday he dedicated the day to meetings with his followers. (I)

Special protection for Correa has been denied

Glas defense announces that he will call Rafael Correa as witness