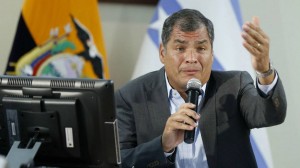 President Correa said Tuesday that US President Barack Obama shows himself “firm and soft” with his historic visit to Cuba and the extension of the decree that declares Venezuela “a national danger.”

“In good time he did visit Cuba, if relations improve … Only the embargo lifting is missing, which is absolutely illegal, inhuman, criminal, Guantanamo must be taken out also. He is firm and soft, because on the other hand he extended the decree that declares Venezuela a national danger, and applies immediate sanctions, which threatens again against all international law,” the president said in a conversation with journalists.

During his stay in Havana between 20 and 22 March, the first by an American president in 88 years, Obama pleaded for leaving behind “every vestige of the Cold War” and said that the embargo of his country on the island, in force since 1962, is “an obsolete load on the Cuban people.”

“Notice, the logic of the Anglo-Saxons … (Obama) proposes to remove the embargo not because it is illegal, because it breaks all international law, the Interamerican law, because it violates the human rights of Cubans. It’s because it did not work, in other words if it had worked the embargo would continue, this is barbaric,” Correa added.

The government will launch bonds worth $ 1,000 million to the stock market