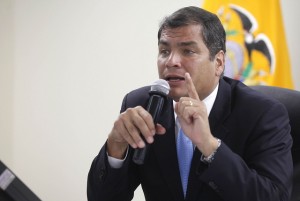 President Rafael Correa said it was a “commitment of all America” to seek an output to the sea of Bolivia and Paraguay. But he explained that his thesis had been “misrepresented.”

“They have said I want Chile to give access to the sea to these countries,” and reiterated it should be treated as an issue of regional concern.

The Chancellery has not pronounced on the Chilean political unpleasantness of certain sectors and included a request that the Government consultation call the Ecuadorian Ambassador Gabriel Ascencio.

The former presidents Eduardo Frei, Ricardo Lagos and Sebastian Pinera, described the remarks as “inappropriate” and “inopportune”, especially when dealing with bilateral issues and which is a cause based in the International Court of Justice in The Hague. During his stay in Chile, Correa told Radio Cooperativa that it was “very unfair that the responsibility is given to Chile.”