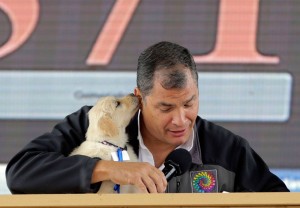 Foundations Ethical Treatment of Animals (TEA for its Spanish acronym) and Animal Rescue, questioned the decision of President Rafael Correa of raffling a Golden Retriever puppy.

Monica Chonillo, member of TEA, explained that the prohibition is stated in the Rules of Responsible Dog Ownership issued by the Ministry of Health in 2009.

She said that Section 6 of that regulation states several prohibitions for owners and holders of dogs, among those, that specified in paragraph K: “give dogs as a reward.”

“It is worrying that someone who says no one is above the law, which is one of the mottos of the president, intends to give a puppy as a reward,” said Chonillo.

The puppy is the son of Segismundo and Melibea, pets of Correa, and will be given to the Twitter user @javoroblesa.

He was the winner of a raffle sponsored by the president through this network, announced Correa on Saturday during his weekly address.