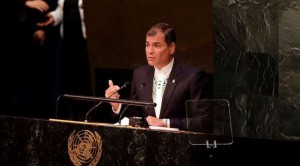 During his participation in the United Nations Summit on Sustainable Development, the president of Ecuador, Rafael Correa, has invited the main economies of the planet to “spend less time diagnosing the underdevelopment of the southern countries and more time to question their own model of development.” Correa considered that in the way to the fulfillment of that goal corrections should be made.

“Alternatives to development must be build rather than alternatives for development, we must build partnerships with markets rather than market societies, because we must assume that dominant forms of production and consumption are not viable, they ignore the eco-systemic limits and intend growth and infinite accumulation.”

He also said that “Ecuador will meet the 21 targets of the 8 development goals of the millenium. At the moment 20 of those 21 goals are met, some before the scheduled time and with greater standards than the agreed.”

“The goal that is still in development is the reduction of maternal mortality by at least 75%. Until today we have projected a reduction of 68% in the current trend,” he said, claiming that these results were achieved thanks to “an unprecedented public investment, one of the highest in Latin America and the Caribbean.”

The Ecuadorian president said that in his country, development is referred as the attainment of Good Living, of peace and harmony with nature, and the indefinite prolongation of human cultures, and specified that the Ecuadorian Constitution is the only one in the world that grants rights to nature.