Rafael Correa: “We will not be able to fully decontaminate the Salado estuary” 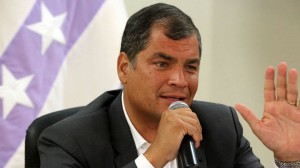 “On April 2017 I will turn 54 and for my birthday I hope to swim in the Salado estuart,” said President Rafael Correa four years ago. Tuesday he announced: “we will not be able to fully decontaminate the Salado estuary” next year.

During a round table discussion with reporters, the president referred to the fall in oil prices, although he did not explain how that affects directly to the project.

“We can not decontaminate the estuary without the help of the municipality and Interagua because there are still pipes and people throw waste into the estuary,” he said. Therefore, he said that the project to fully decontaminate the Salado estuary, ” will have to be continue by the next government.”