Rafael Correa will travel to Mexico for Latin American Summit 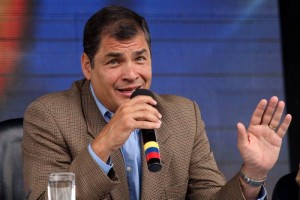 President Rafael Correa will participate next week in the Ibero-American Summit to be held in the Mexican city of Veracruz.

The news was confirmed by Correa in his Twitter account stating: “Monday 8 and Tuesday 9: Ibero-American Summit in Veracruz, Mexico.”

It is expected that Correa travels the same Monday to Veracruz and returns to the country on Tuesday-The president will attend the event accompanied by hisForeign Minister Ricardo Patiño.

The XXIV Iberoamerican Summit will bring together leaders of the region and for the first time King Philip VI will participate.